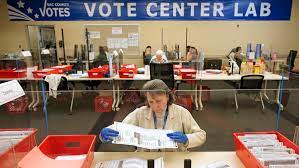 LOS ANGELES — The November candidates for California secretary of state — Republican business executive Robert Bernosky and incumbent Shirley Weber, a former Democratic lawmaker — appear to agree on the need to increase voter registration and voter turnout. The Secretary of State is the Chief Election Officer in California and provides information to voters about ballot initiatives, statewide candidates, campaign finance and lobbying in Sacramento. The agency also monitors business licenses and notices in the state. California is already one of the easiest states to register and vote, with 81 percent of eligible voters registered thanks to recent laws that expanded voting rights and access. However, both Bernosky and Weber said during their campaigns that they saw growing apathy among voters. They say some Californians feel their votes don’t matter or that they don’t know enough about current political issues. Others say they are simply too busy to show up to the polls or drop off or send in their ballots. Bernosky hopes to encourage voters to elect leaders who support pro-business policies, lower taxes and other conservative initiatives to create more “balance” in the state legislature, which he says will “put California out of business.”

Drawing on his experience as a businessman with investors, he said he regularly works with voters and sells them on the idea of ​​investing in California through voting. “We have to make the Republican Party of California relevant again in California to achieve that balance, and I hope we will,” said Bernosky, who represented the Midcoast State GOP district as vice chairman from 2016-2020. However, Bernosky may have trouble getting the word out to voters. He raised almost no money for his campaign, according to state campaign finance records.

Weber raised about $1 million. Weber said his approach to the position has been less partisan since Gov. Gavin Newsom nominated him in 2021 to fill Alex Padilla’s U.S. Senate seat. Weber, a college professor before entering politics, was the first black woman to serve as California secretary of state. Weber, who spent four terms as a member of the state Assembly representing parts of San Diego County and authored influential education and racial justice pieces, said he is proud of his ability to build bridges and garner bipartisan support. During her short tenure as secretary of state, she prioritized raising awareness of her predecessors’ suffrage achievements — 16-year early registration, same-day voter registration and parole — and supporting laws such as voting rights. rights the pandemic-inspired policy of sending a mail-in ballot to every registered California resident.

We tried to help them understand their power,” Weber said, referring to speaking tours on college campuses and high schools across the state aimed at registering younger voters, whose turnout typically lags. “Because maybe they felt that way. powerless and help them understand that your vote is one vote and it’s as powerful as mine and as powerful as the governor’s.” Californians voted Weber into his first term in June’s primary. He received nearly 60 percent of the vote. , Bernosky 18.6 to percent.

While Bernosky praised the recent expansion of voting access, he warned of potential security issues. He cited problems with the state’s 2018 launch of the Department of Motor Vehicles’ “Motor Voter” program, which automatically registers eligible voters when they register a driver’s license or state ID. The program registered thousands of voters with false information, including some who were not eligible to vote, such as non-citizens.

After two failed bids for the state Assembly and a position on the board of the Hollister School District in his hometown of San Benito County, Bernosky said problems with the DMV program prompted him to consider a run for secretary of state. Bernosky, a supporter of former President Trump, acknowledged the threat of election denialists after a pro-Trump mob stormed the US Capitol in January. 6, 2021, to prevent Congress from recognizing President Biden’s victory, but said they do not represent the majority of California’s conservative voters. To address skepticism about the electoral process, he plans to tighten electoral rolls, ensure that names are not duplicated and simplify the process of verifying signatures.

“I just want to remove any doubt about the quality of our selection,” Bernosky said. Weber confirmed that his predecessors had already reviewed and fixed problems with the DMV program, which registered more than a million voters in its first year. He said there was room for improvement in the voting system and admitted there were flaws, but pointed to the June primary as evidence of a smooth electoral system. If elected, Weber plans to resume discussions with lawmakers about overhauling the state’s recall process. The move, he said, is possible after he oversaw a failed Republican-led anti-Newsom recall effort last year. Among the proposed changes would be to install a deputy governor in the event of recall of the governor, instead of electing a substitute in the same vote.

The candidate with the most votes in the general election wins – regardless of how many votes they receive. “When it comes to being governor, we really should have some confidence that they really represent us and it’s not just a fluke that somebody came in and didn’t have as many votes as the governor who got kicked out,” Weber said.