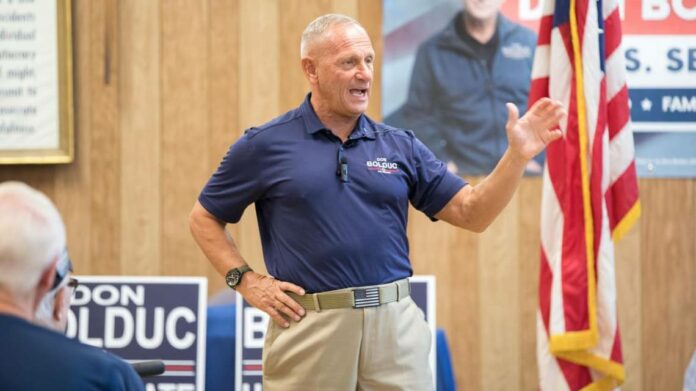 New Hampshire Republican Senate candidate Don Bolduc had a burglary at his home that turned “aggressive toward police” and required a call for backup in 2018, according to an incident report and eviction notice obtained by The Daily Beast.

After arriving at Bolduc’s home, Stratham Police Department officers called the dispatch center to report a “verbal domestic” incident and requested assistance. In a redacted incident report, police interviewed a man outside a home who became aggressive with police and said, “I feel like I’m being questioned in my own driveway.” Police describe the rest of the family as “very cooperative” in the incident report. Attempts to calm the person down were initially unsuccessful and the officer reported that their “demeanor did not change and was still very fearful.”

The officer’s report also indicates that two people in the home “were arguing and it escalated” and when he asked the driveway for an explanation, they only said, “It just happened.”

“I explained to [redacted] that I wasn’t sure why [redacted] was being so aggressive with the police because the rest of [redacted]’s family was very cooperative,” the police report said. An officer later called back to send: “No crime. Peace restored.”

Six months later, Bolduc formally announced his first bid for the Senate, defeating Bryant “Corky” Messner in the 2020 New Hampshire Republican primary, losing to Senator Jeanne Shaheen by more than 15 points. Bolduc campaign spokeswoman Kate Constantini said in a statement to The Daily Beast that the outburst was caused by “brothers becoming brothers” after one of Bolduc’s sons was involved in a car accident driving home for Christmas.

He did not contact the police. “Brothers are brothers, and the next morning, when the damage to the car was discovered, tensions between the boys were high,” Constantini said in a statement. “This incident was resolved between the brothers. As an extra precaution, an EMT was called when the general was unable to defuse the situation. Fortunately, he was fine and the family had a wonderful Christmas.”

Stratham Police did not respond to a request for comment. Although Bolduc’s personal Facebook page still lists him as an active patrolman with the Hampton Police Department, he is no longer an officer. .

There The retired brigadier general promoted his support for police by posing in both Senate campaigns. pictured with Salem police last July. Bolduc wore a shirt that read “DEFEND NOT IN MY BLOOD” while holding a “DEFEND NOT DEFUND” sign.

The transition de Bolduc’s run to the general election was rocky. After months of accepting Trump’s campaign lies — he was one of 12 retired generals who signed a letter claiming the 2020 election was stolen and that President Joe Biden was not elected legally — he overturned the race days after winning the primary.

“I’ve done a lot of research on this and I’ve spent the last two weeks talking to Granite Staters across the state and from all parties, and I’ve come to the conclusion, and I want to make sure here, that the election was not stolen,” Bolduc told Fox News. Two weeks earlier, he said that he would leave the letter and would never resign due to a ban on the election.

“I signed a letter with 120 other generals and admirals saying that Trump won the election, and hell, I’m going to stand by my oath,” Bolduc said at a discussion hosted by the far-right Government Integrity Project. “I don’t change horses, dear.” Bolduc also trailed Republican New Hampshire Gov. Chris Sunu in the primary.

He took credit for keeping Sununu out of the race, dismissing him through a supposed “Sun Tzu-like campaign.” Bolduc also called the country’s fifth most popular governor a “supporter of Communist China.” Sununu’s late endorsement of Bolduc’s opponent wasn’t enough to turn the tide, and the pair ended up on the camera after election night. Sununu offered a handshake, and Bolduc hugged.

On the night of his main victory, Bolduc brandished a Halloween toy – the shield of King Leonidas from the movie 300 at the end of the shoot. A member of the Republican National Committee told The Daily Beast that most Granite State GOP operatives have already removed Bolduc.

“He’s running anyway, I think he’s got enough other things going on,” said an RNC member, speaking on condition of anonymity to discuss internal considerations. “If you were my Maggie Hassan, my dearer nun.”